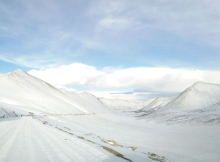 The Tibetan Plateau has an average altitude of over 4000 m and is the region with the highest altitude and the largest snow cover in the middle and low latitudes of the Northern Hemisphere regions. Snow cover is the most important underlying surface of the seasonal changes on the Tibetan Plateau and an important composing element of ecological environment. Ice and snow melt water is an important water resource of the plateau and its downstream areas. At the same time, plateau snow, as an important land-surface forcing factor, is closely related to disastrous weather (such as droughts and floods) in East Asia, the South Asian monsoon and in the middle and lower reaches of the Yangtze River. It is an important indicator of short-term climate prediction and one of the most sensitive responses to global climate change. The snow depth refers to the vertical depth from the surface of the snow to the ground. It is an important parameter for snow characteristics and one of the conventional meteorological observation elements. It is the key parameter of snow water equivalent estimation, climate effect studies of snow cover, the basin water balance, the simulation and monitoring of snow-melt, and snow disaster evaluation and grading. In this data set, the Tibetan Plateau boundary was determined by adopting the natural topography as the leading factor and by comprehensive consideration of the principles of altitude, plateau and mountain integrity. The main part of the plateau is in the Tibetan Autonomous Region and Qinghai Province, with an area of 2.572 million square kilometers, accounting for 26.8% of the total land area of China. The snow depth observation data are the monthly maximum snow depth data after quality detection and quality control. There are 102 meteorological stations in the study area, most of which were built during the 1950s to 1970s. The data for some months or years for sites existing during this period were missing, and the complete observational records from 1961 to 2013 were adopted. The temporal resolution is daily, the spatial coverage is the Tibetan Plateau, and all the data were quality controlled. Accurate and detailed plateau snow depth data are of great significance for the diagnosis of climate change, the evolution of the Asian monsoon and the management of regional snow-melt water resources.